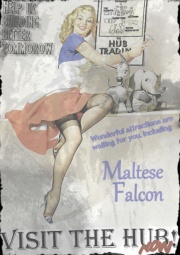 Advertisement for the Hub, made during the project to attract more people in Hub.

The Hub roleplay project was a roleplay project lasting approximately from January to February 2010, in FOnline: 2238. Its goals were to make the Hub a living and roleplaying place, thanks to 100% roleplay characters, but also useful shops/organisations and the help (if needed) of GMs. Its official IRC channel was #hub2238.

The few, the proud, the Hub roleplayers ! This could be the motto of all the players that took part in this fantastic rolepay project. Started by players, animated by players, ended by players, it is certainly the best roleplay success in FOnline: 2238, and also the sadest fail. A few players started to roleplay in Hub, which was still a empty town next to the crowded NCR, and tried to turn it into a valuable alternative, with player-driven shops, bars and so on. Later, more enthusiastic players came to roleplay, GMs played the local police officers and gave empty buildings to shopkeepers. The Maltese Falcon was crowded night and day. However, some players thought that the fact so many people had fun without a single gunshot was quite annoying, so the project had to face a massive assault of suicide bombers and sneaky assassins, that went inside of the town to kill any roleplayer they saw, regardless that Hub was a guarded town at that time. The several attacks were eventually successful, and less roleplayers came to Hub. Then, the project was already dead, and ended after one month of existence.

Hub roleplay project is the most successful roleplay experience in a public location. It gathered artists and skilled roleplayers as well as committed casual players, from every country, which made its success. The roleplay was also simple enough to allow everyone to give it a try - roleplaying a random wastelander - and large enough to allow complex backgrounds as well as real shopkeepers jobs. However, the lack of filters in the entrance of the town made the project vulnerable to random attacks from griefers. Despite the sad ending, Hub roleplay project still remain in everyone's mind a successful and really enjoyable experience.

Informations about the roleplay

This part was written when the roleplay project was still alive, providing useful informations to guests or roleplayers.

These laws have been decided by the project leaders. They are additional laws to the normal guarded towns ones (do not steal/attack someone, or block the path). Police officers (players) have to make them effective... And it can be by killing the outlaw, or escorting him to the jail or out of the city.

"Need to secure trade? Looking for caravan? Will hire a guide? We go as far as possible, FarGoTraders. Visit us everyday, Hub, Down the main street. Radio channel 31313 irc channel: #fargotraders  !"

Children of the Cathedral

Deputy Feral, his sniper in his hands, guarding the Hub next to his men.

A summary of all the roleplay characters you may cross in The Hub.

He is the leader of the Hub's cops, suspecting the Maltese Falcon to host the Hub Underground organisation. Mistrusting Kane, and notorious criminals. Gentle, but rude with criminals, he can sometimes be seen patrolling with his men and guarding the town.

He is leading the Hub's cops with his friend Deputy Feral. They have pretty much the same characters. It is known, that Cpt. Nikopol tends to extreme actions, when it comes to reach a target... or hit a target with his sawed-off shotgun.

Kane is the bodyguard and right-hand man of the Hub's local crime boss, Decker. An "employee" of the Maltese Falcon bar, his intimidating presence is usually stationed at the door to the basement, Decker's sanctum and audience chamber. Like many hired hands in a bar that do not handle the mixing of drinks, Kane's primary job is to serve as a warning: any misbehavior is not tolerated. Don't even think about being rude with him.

A clever kid who hangs around Maltese Falcon. He could be everywhere. And he probably knows what's going on in town. His real name is Victor.

Tommy The Gun - spending his free time in Maltese Falcon, watching over the place.

Owner of Far Go Traders. He pretends that he knows nothing about drugs in his company, but town everybody knows that he is cooperating with Imprezobus. Liked by most of Hub citizens because of his wealth.

Known not only in the Hub, he moved there to rest from the crowded city of NCR. As co-manager of Maltese Falcon, he tries to keep the place clean and safe. He’s also the leader of The Wild Bunch. Most of the time, he is drunk. He’s a great pal for some small-talk, don’t trust him too much though!

Member of The Wild Bunch, also known as a Psycho and even the Devil itself. Before he moved to the Hub, he used to be a slaver – and he still wears his Tattoo with pride. Now he helps TommyTheGun with running the bar – regardless if it means tending to the bar, or kicking out unwelcome guests. Don’t mind his jokes though, he won’t do you any harm as long as you won’t give him a reason

Barman, stuck in his room, as always.

One of initiators of Maltese Falcon. Everybody knows him. Everybody loves him. And, everybody hates him. He will sell you the best vodka in the Wasteland, but try not to piss him off, or he'll... just come to Maltese Falcon and see what'll happen. Good luck.

Member of the Children of the Cathedral. Weak on strength but strong in faith. With a small number of followers, he tries to spread the Master's word. Healing not only soul, but flesh as well. He spends most of his time in the Maltese Falcon, drinking and trying to forget about what happened to the Master. Preaching a lot in the pub which eventually leads to him getting kicked out. He can be also found on the South Side of the Hub sleeping in the church.

Reconite chilling out in the Maltese Falcon.

The young, but resourceful wastelander from north of NCR, he carries his trusty 'City Killer' Combat Shotgun and is known to withhold heavy recoil with ease. He specializes in Mechanics and Scientific skills and has travelled far across the Wasteland in search of riches, before stopping in the Hub for some peace. His stance on the criminal activity in the Hub is neutral, if it's profitable he may do jobs for either side.

Raider of northern towns in the past, and currently Mr. Decker's personal assistant. Mercenary, bountyhunter, his lifestyle hasn't changed much since he appeared in the Hub. Making Bounty Hunters' contracts, eliminating Mr. Decker's competitors and gathering "protection" money from traders, not only in the Hub, but in nearest southen towns too, thats his job. He doesnt hide his dislikes about the law enforecement in the Hub. He's seriously in-love with the Bar Lady and doesn't allow anyone to be too close to her. If you wanna talk with him, you better buy a whiskey first.

Imprezobus, who was once a great guide, slaver and junkie has changed his life through the use of his wealth, which may seem strange for his age of 17. He got rid of his Jet addiction and somehow managed to remove the slaver tattoo that he had (some say that he just hid it after scars). But he kept his skills in guiding people through the wasteland, and finding ways to use them in dire situations. He combines his Legal knowledge, skills in Outdoorsman and is the right person for organizing caravans, secured trades and hunting trips, with his underground activity and criminal experience to perform a range of 'talents' from Smuggling to Drug Dealing, proudly in the name of the Far Go Traders.

Brother Arm, in his robe made of molerat fur.

Also known as Brother Arm, his real name is Arminius. He's a priest and philantropist. Few is known about his beginnings, but it's believed that he was raised by survivors of a raiding spree, who took shelter in the sewers of a pre-war town. What's well known is that he came to believe and worship what he calls the Rat God, and began preaching in Modoc. After a while he had to leave, as raids were intensifying, so he found freedom of speech in NCR. However, with the growing number of atheists, he decided to search for new grounds. It was when he heard of the increasing presence of the Cathedral in the south, including the Hub and Necropolis. Having gone to Necropolis before and seeing first hand what happened there, he decided to move to the Hub to save its population. Saint Arm fights with his fists, in a style he dubs Rat-fu, which is not really based in technique but more in fervor.

The wanderer couldnt find his place to settle down for a long time, now he decided to make his home in Hub. He tries to live here from things he can trade to the local shopkeepers and factions. Additionaly, he wants to produce antidotes to earn some caps, by hunting radscorpions near Hub. He also travels to other city to gather junk stuff that he sells to hub shops, factions and bartenders. He can deliver alcohol to the bar or stuff to factions, repair things, and has got a locker somewhere in town to store his poor stuff. 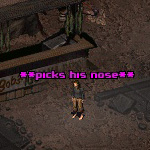 A homeless child that lives on the streets of the Hub, the little urchin talks with a strange mixture of English and French. He is always hungry and it is noticed that things often seem to go missing when he is around. If you are nice to him and give him something to eat, in return he may pay you back with some valuable information. He says he stowed away on a caravan wagon to get to the Hub from the Den, but hardly anyone believes it. He also claims to be 14 years old, but that is most probably a lie.

Used to be a Mordino Family member. Fleeing from his past, he settled down in the Hub. Now he's running some shady business in the Far Go Traders' building.

An Emperor without an Empire. Now he wants to create his own Empire with the Far Go Traders and LAW Team. He's talks about the Force but nobody's ever seen it. There are rumours that he is the Shi Emperor - 'human with a cybernetic brain' but those rumours are lies! He is the Chief Security Officer of the Far Go Traders.

A simple street-girl from the L.A. Boneyard. She is a good scout and very beautiful.

He was thrown out of his hometown, Modoc as he was a kid (he doesn't want to talk about the reasons, but you can try to ask him). After that, he left civilization and lived in the desert. There he became a bit mad, thinking that mankind should respect mother nature more. He tried to resurrect plants and trees everywhere he can. Now he wandered to the hub, to spread the word. He also gives away nature products, like roots, fruits or fibers. He fights the war for mother nature!

Aston Maning is a new, eager member of the Children of the Cathedral. Fascinated with the great idea, he works in service to the Master. He wants to diseminate help to try and unite the wilderness of the wasteland. Because everything is beginning with small steps, and can grow great fruit in the future.

A young hunter born in Klamath. He carries a .44 Magnum as a sidearm, and a sniper rifle as his primary weapon. Specializing in marksmanship, he hunts whatever the wastes can throw at him, making a living off selling pelts and other goods. He stops in at The Hub time to time to get a decent drinking night in, as well as looking for whatever odd-job work he can get there.