The game's logo.
FOnline: 2238 is a game based on the FOnline engine, developed by a small indie development group, the "Rotators", supported by the main developer of FOnline, A. Cvetinskiy "Cvet". It was firstly created on late December 2008, when FOnline's Open Beta Test 2 was ending. It is commonly admitted that FOnline: 2238 offered (and still offers) an alternative to the original FOnline, where mainly fights where happening, with overpowered gear easily available and no level cap.

Here is a small list of some notable differences with the original FOnline game.

The official FOnline:2238 press release was posted by the rotators on their blog, on July 8, 2009. You can find the exact article here.

The small indie development group, "Rotators", supported by the main developer of FOnline, A. Cvetinskiy "Cvet", are proud to present FOnline: 2238, the new massively multiplayer game, free of charge, based on the famous award-winning CRPG titles Fallout and Fallout2.

Bringing the single player experience into a massively multiplayer game was not an easy task. Merging the existing features with new ones in order to provide as much game experience as possible, the young developers aimed for the recreation of the Fallout world as we knew it back in the late '90s, keeping the emphasis on the alternative, unique universe and its settings. The game will remind you of Fallout 1 & 2 everywhere you go - the places, the people, the common history and the events that shook the world and keep it trembling. 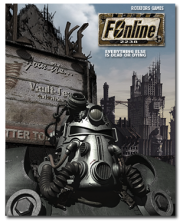 Humanity, or at least what is left of it, has no time for a break. Faced with constant challenges, surviving in the harsh post-apocalyptic, post-nuclear, barren world, struggling for an uncertain tomorrow, the humans, ghouls and mutants are organizing themselves to push it through. To make it. To stay alive. Each group, each place, each organization with its own agenda, with its own ideology, fighting for their place under the scorching Sun. What they believe may be right or wrong... Who are we to judge, while striving for the same old necessity - survival?

The game adds several unique features regarding the players and their interactions, be it with other players, their respective groups or NPCs. First of all, there are groups: factions, gangs - call them whatever you like, which determine the fate of the world. Some of them are more powerful than others, some are cunning and treacherous, some even hideous. But they are there, conflicting with each other, or aligning with the policies of the greater powers - those who have technological advances, political power, are just plain bigger, or any other advantages over them. Choose your way: join your favorite group and spread their agenda throughout the wasteland. Decide for yourself how to handle the resistance - with good will or stubbornness. Respect the authorities or lead a revolution to throw them off the throne - it is your world, you decide.

If you don't feel like belonging to a group and have your own ideology, then you can take one of the numerous paths the wasteland offers. Some of them are: bounty hunting, brahmin trading, crafting, exploring and trading in general. The brand new system of professions allows you to polish up your skills and learn things you will rarely find in books, giving you a certain advantage over other players. Scavenging, gathering resources and useful items will be an inevitable part of your FOnline: 2238 life. Crafting something useful out of the gathered junk or selling it directly to your favorite vendor are just a small part of the great possibilities this game offers you. And of course, you can just take them off someone else, simply by brutally killing him/her or using more exquisite methods, like stealing. The choice is yours - and so are the consequences. »