Bases are the core of FOnline: 2238. They were, at the very beginning of FOnline, the first difference between the two servers (2238 and TLA). At that time, FOnline: 2238 was still called Factions Mod. By buying a base, your gang gets a faction name, a safe place to store its stuff and a computer to add or remove players from the gang, which is the main difference from the simple tent. Faction bases will appear in blue on the worldmap.

If base's terminal isn't used by a member at least once every four weeks, the base and the gang name will be removed.

To buy a base

You can buy a base in Redding, Klamath or Junktown. At each location, the base seller is a trapper into the town's main bar. Bases cost 30 000 caps, 50 000 caps, 70 000 caps, 130 000 caps or 500 000 caps. Talk to the trapper while a few members of your gang (Two or three) are arrowed on you and very close to the trapper, then tell him what kind of base you wish to purchase - depending on price. Clicking on the "say" button will allow you to write you own faction name (The chosen name has to be on that list). Well done, your faction is made and your gang has a base that you can see on the worldmap!

Previously, you could only create a faction and purchase a base by talking to a trapper in Redding, Klamath or Junktown. The base would then be spawned in The Middle of Nowhere.

A new method of creating bases is a DIY base. If you gather 10 000 caps and go to construction a foreworker (in NCR, VC or SF) with two other players, you are able to create a DIY base. You can also pick a faction name (if you are buying a base for the first time) and once the purchase is made, you get construction worker in fancy red shirt who follows you to your base location. Try to quickly move to exit grid, some players will attempt to kill the construction worker if you are not careful. Sometimes, the construction worker may disappear from your base or tent. If this does happen, you must leave your tent or base and enter the world map and wait for the worker to join you, usually it takes several attempts. 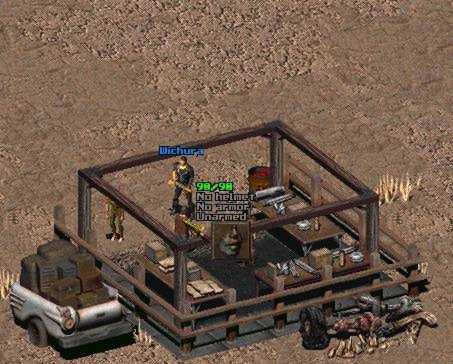 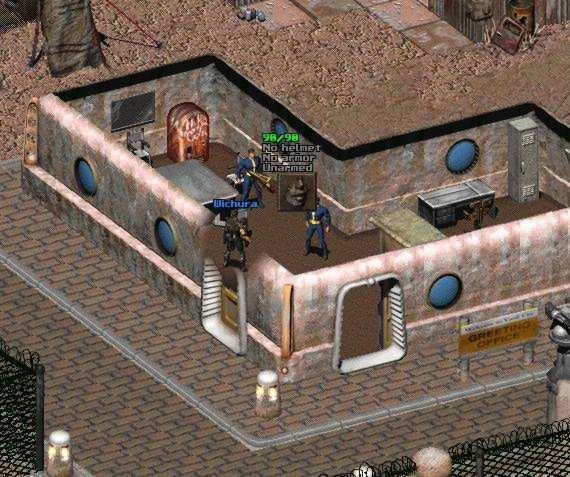 With the construction worker in party you can go to your desired base location. Next, you enter an empty encounter (much like you would for creating a Tent) and tell worker you want to have a base constructed here. Then you get location named "Building Site" on your world map: 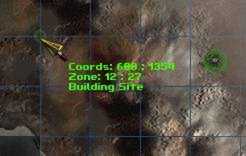 After gathering all of the required materials, you can talk to the construction worker again, he will ask you about a base name (not bound in any way to the faction name, the base name only for recognizing this base in the terminal - Brand New Terminal services all faction bases from one spot), then the Building Site turns into the fully constructed base you worked so hard for. The Construction worker will now disappear, as he has no use any more.

Buying additional bases with the same faction leader does not require having two other players in your party and you do not have to give the faction name again.

There are four types of bases to pick from:

After buying a worker and after constructing a base you need to set Hideout clearance in base's terminal according to your needs. This allows certain players to see the base. Sometimes a newly added player will need to relog before being able to see the base on the world map.

Note: Clearances are automatically reset when the construction site changes into a base. 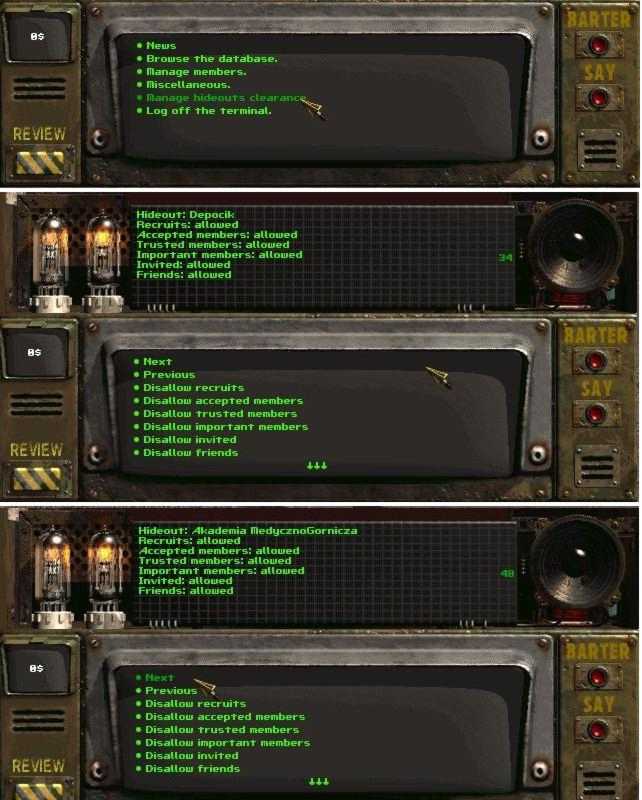 Particular case : Member of another faction

If you are already part of a faction (Like Vault City, the Mordinos, a players gang, etc), you won't be able to buy a base. You have to leave your previous faction first before you can create or be invited to another faction's base.

From the "Manage Members" option, you can add a new member to your faction.

In the "Manage Members" menu, leaders of the faction can manage their members.

You have to be the leader of the faction or an important member to add a new faction member:

You have to be the leader of the faction or an important member to do so :

You will then have to bring the new friend to your base. From that time onward, he will be a friend of your faction and will see the base on the worldmap. Upon entering your base location the player will recieve a message in the chat window confirming that they are considered a friend at the base and can freely return to the location. If a friend is killed at the base for whatever reason, they will no longer see the base on the world map. To re-add them, simply bring them back to the base location, you do not need to add them as friend again.

To change the status of a record once it is entered, simply browse through the database.

You have to be of an higher rank than the player you want to promote/demote.

To set a new leader, the actual leader has to resign (he can be invited back to the faction after resigning). After the leader's resignation, the highest promoted member will be set as the new leader. If there are more than one player at the highest rank (Right before leader), one of them is chosen randomly.

You can put some mercs or slaves in your base to defend it. They will kill any enemies entering your base (An enemy could enter your base if a faction member betrays your faction and leads them there deliberatly, or if they sneak and tag on a faction member and follow them back to the base). Tell your [[mercs] or slaves to guard the base, and to shoot at anyone who isn't a member of your faction.

The Cave, really easy to defend but a bit small. It is divided into two parts: the cliff side with a cave entrance on an empty desert map, and inside of the cave itself. It contains the usual crafting tools (Workbench, still), a brahmin pen and only 3 lockers. It's not a cost effective base since Depot has more containers and is sold at the same price, but the cave does has one advantage: it's very easy to defend because you just have to put mercs or slaves in front of the tiny cave entrance. The cave is the only base you can purchase from all three of the base sellers. Because of this, the Cave is one of the most varied bases around as it can be purchased almost anywhere for a measly 30k caps.

Depot is a small outpost, with 3 lockers, 2 desks (one looks like a workbench), 2 shelves, and 2 table. 9 containers total when you consider it also has a workbench with the standard toolboard for small storage above it and a still. There's also a brahmin pen containing one brahmin. On the map, you can find wood and flint (does not replenish). It's a good and cheap base, and the spawn is straight below the door and chairs outside. Guards can be placed to the far right of the spawn, near the trees. They will have the small spawn area directly in their sight. Base locations seem to typically be somewhere to the West of Klamath. The Depot is sold in Klamath, and is the same price as the Cave, yet offers considerably more in terms of storage space. Depot can be purchased from the base seller Smiley in Klamath. He is located in the bar and hotel at the Main entrance.

Scrapheap is a popular base costing 70 000 caps. It is larger than Depot or Cave. Its location is often between Redding and Broken Hills. It contains 5 lockers, a workbench, a still and a brahmin pen. The Scrapheap offers a low amount of resources when compared to other bases, with the Cave being on similar grounds yet having a bigger brahmin pen and more brahmin than both Depot and Cave. Scrapheap is Redding's specialty base. It is sold from the Redding base seller who is located in the Malamute Saloon, which is above the Doctors building.

A pre-built outpost is the most expensive base, second only to the bunker. It is very easy to defend because it is surrounded by walls, and has three buildings plus two tents, and is probably the most popular base amongst most players. Its location on the worldmap will often be between NCR and Junktown. It has 10 containers, a workbench, a still, a water pipe, a well, fibers plants, and a larger brahmin pen with more brahmins than other bases. New characters can shovel more poo in peace. It's a large map with plenty of space on the ground to lay out rows of important items. The Outpost base is the speciality base sold from the Junktown base seller, who is located in the very first building after entering Junktown via the south gate.

The Trapper Camp base

The Gasstation Camp base

The Old Bunker base, outside

The Old Bunker base, inside

The bunker is by far the most expensive base. While the outside part of the map is very difficult to defend, an enemy will have a very difficult time getting to the inside of a well-guarded bunker. It has fifteen lockers, a crate near its still, two computers that contain electronic parts, four private rooms in the back with showers, a waterpipe, a broken Mr Handy robot, a broken elevator, and wall safes that are often overlooked. The room with four lockers is locked with a yellow pass key, making it safer to store your valuables in the event of a raid, for a total of 23 storage containers plus a workbench. It houses a large conference room with a big-screen video display toward the back for those important meetings. Besides its massive amount of storage space, the mouth of the bunker opens into a small mine with iron ore and minerals, making this by far the best base money can buy. Oddly enough, the base has no brahmin pen.